In terms 2 and 3, Room 10 students were learning about argument writing and how to effectively describe their point of views to the reader. One of our topics to write about was brought about by Covid 19 and our closed borders. During class we discussed the very real issues that our country has facing due to the lack or tourists coming entering New Zealand. As a result one idea that was discussed was whether or not students supported having a four day week and three day weekend. As you can imagine there was a lot of enthusiasm for this topic.

The class researched the effects of productivity and health benefits associated with having an extra day off each week. This also led to extra benefits associated local tourism. We also discussed who would be the best person to contact to persuade into adopting this fantastic idea.

The class thought the best person to write a letter to would be our Prime Minister, Jacinda Ardern, asking for a four day week and 3 day weekend. We looked up whether or not you could actually write a letter to our Prime Minster and we found that it was quite easy to do so. We did realise that being the leader of a country is a pretty busy job and we might not get a response quick or at all. However several letters were chosen to email through Ms Ardern. The letters have been attached below. I have also attached the official response from our Prime Minister!!!!!! 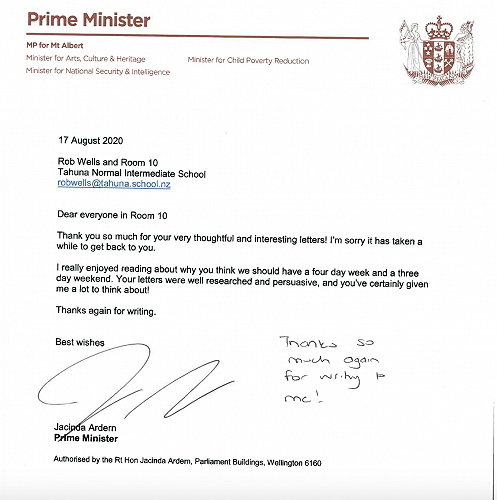