Great finish to the hockey season

A very enjoyable hockey season came to a perfect end when the Tahuna "A" squad took out the Year 7/8 competition final with a convincing 5-0 win over Balmacewen last Friday.

All four Tahuna hockey teams finished the season strongly last Friday evening at the McMillan Hockey Turf. The "B" team had a great win and played excellent, flowing hockey. Meanwhile, the "C" team had a hard-fought draw against the John  McGlashan "B" team. The "D"s showed further improvement when pushing Balmacewen's "C" team hard in a 3-0 loss.

In reaching their fifth consecutive final, the "A" squad had a very strong season and finished with an overall record of 14 wins and one draw. They scored a remarkable 102 goals and let in just 5 goals in the whole season. They came out very strongly in the final and were 3-0 up within 20 minutes. By half-time it was 4-0 to Tahuna.

Balmacewen came back strongly in the second half but the Tahuna team defended brilliantly, soaked up lots of pressure and were then able to break out and make it 5-0. The goals were great team goals with excellent passing and great teamwork unlocking the Balmacewen defence.

James Nicolson and Patrick Ward got a goal each while Parker Aluesi took his tally for the season to 34 goals with a hat-trick.

It's great to see hockey at Tahuna in such good heart and we're looking forward to seeing lots of the players back next year. Many thanks to all our parents for their help and support throughout the season. Thanks also to Marty Glossop, Louise Nicolson and Tavish Voight for their huge help with coaching our teams. 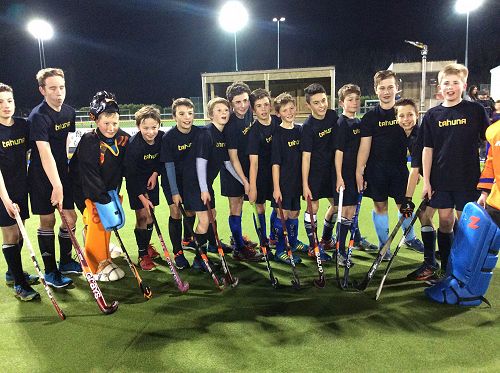